Oh hi there readers, long time no see. The eagle eyed amongst you will have noticed there have been very few (read, zero) posts for a while now. I haven’t been running and I also haven’t been feeling too anxious, so there’s not been much to write about. Never fear, that’s all about to change.

Remember that time I was really sick at Bath Half? My running never really recovered from it. It turned into a couple of months  of misery, feeling breathless, sick, faint, and slow every time I ran and after several doctor’s appointments was diagnosed as an arrhythmia. So that explains a lot. This had not been the case when I signed up for a bank holiday weekend of racing, and convinced several friends they really wanted to do that too, and so I turned up to run a 10k, having not covered the distance in weeks on end and having lost a lot of (read, nearly all) aerobic fitness.

I was supposed to run the Westminster Mile on the Sunday but ended up staying out on the Saturday night so promptly wrote that off. I still love wine more than running. At 7am on a bank holiday Monday – an hour earlier than I get up for work – I was struggling to eat some toast and commiserating with friends via text about being awake. Thankfully, nobody seemed to quite remember at this point that it was entirely my fault we were doing this.

I met TeamPaella (or, friends I’m running in Valencia with this winter, to the uninitiated) in Green Park and was immediately a bit surprised by the scale of the operation. 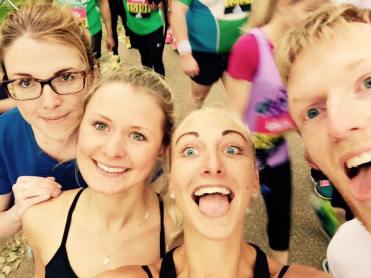 I live in London but hadn’t appreciated what a large event the Vitality London 10,000 is. As a side note, just how many races do Vitality want to sponsor? It feels like a lot of my year was supposed to be sponsored by Vitality until I had to miss a couple of races. It was a surprisingly chilly day (although I still nearly boiled while running, as is my way, despite shorts) and so we delayed heading to bag drop and having to cast off layers for as long as possible. And that’s how we ended up with a lot of pre-race selfies.

I actually found it to be a relatively bland route. It’s essentially a narrow loop from Pall Mall to the City and back, and aside from running through Trafalgar Square close to the beginning, and the last km starting with the Houses of Parliament and finishing with Buckingham Palace, I don’t find it very inspiring. I suspect some of the London magic is lost on me considering the City end of the loop is really just my lunchtime wanderings (we in fact were within <100m of my office at one point). I can’t fault the support and entertainment all the way along the route however, I don’t think there was a quiet point on the course.

I crossed the finish line in 1:04:30, which is a good 8 minutes away from my PB. A lot of me is sad and frustrated. A smaller part of me recognises that this really is fairly reasonable, given how much time I’ve had off. I was purposefully very cautious during the race both in terms of my pacing and building in a lot of walking because I was concerned about actually finishing, so I’m hoping 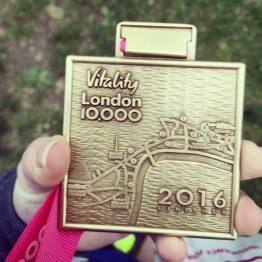 now that I’ve broken through the psychological barrier of completing the distance again, I can start picking up some speed. I was rewarded for my efforts with some fairly excellent supersize bling, a finisher’s shirt that I actually like and might use (rarity!) and a goodie bag which included food and suncream (those who follow me on Twitter will know I’m militant about the sun). I sped through the most efficient bag collection I’ve known, and returned to Green Park to meet everyone who helpfully loitered despite all finishing about 15 minutes before me. It’s okay, they passed the time taking photos with their medals, they were happily occupied. Didn’t even notice I was gone.

We eventually met some of the others of the ukrunchat crowd (after much milling around letter B of the charity stands desperately trying to spot people in the crowd) and headed to the pub; a happy end a delightful bank holiday weekend. 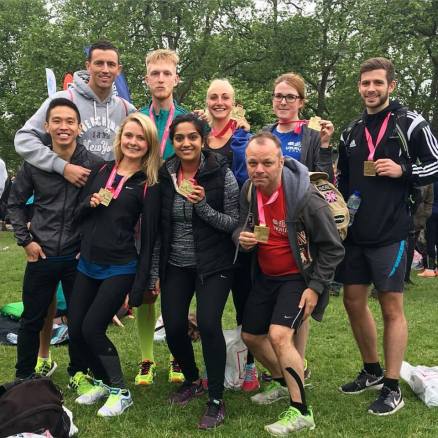