The blog has been on hold of late. As some of you know, I made some fairly drastic changes to my life this summer. After spending my entire career so far working in law in varying capacities, and a couple of years in London, I finally accepted that I wasn’t happy and that no job, boyfriend or any amount of running was going to fix that. I tried so hard to make it work because I was afraid that leaving law and/or London would mean that I’d failed but neither of those is right for me at present and that’s okay. 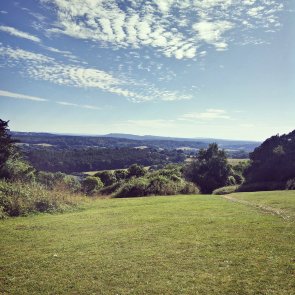 about halfway between my life in London and my beloved south coast in Hampshire. I’m only 40 minutes on the train from Waterloo (as opposed to 20 when I lived in Wimbledon, so hardly the ends of the earth!). I have easy access to so many beautiful trails and the North Downs Way is only a few miles from my front door. I’m now the Marketing & Development Manager of a charitable organisation just outside Guildford, only months after questioning why I wasn’t doing just that. It’s tough starting again. I don’t have friends here and there have been a few nights of crying about feeling lonely and worrying that I’ve done the wrong thing but that will settle.

So, to running. I must be doing loads of it, what with my newly found work/life balance and access to beautiful countryside. Actually, no, much like this blog, the running has also been on hold partly because I’ve been questioning my participation in the running community and its effect on me. I recently reread a piece that Gary wrote for Run247 about Strava and whether it influences the hows and whys of our running. Are we upping the distance, the pace, the elevation, because of how it will be perceived on Strava, rather than because that’s what we want or because it’s a sensible approach to our running? It’s called the Hawthorne Effect, in which we modify our behaviour in response to being observed.

Running is supposed to help control my anxiety but of late I’ve found that anxiety is controlling my running. I worry that people are seeing my uploads to Strava and judging me for not running further, for not running more frequently, for not running faster, for how high my heart rate is. That isn’t true of course, it’s a mixture of severe anxiety and a touch of narcissism to think anybody cares. Still, I stroll back from failed runs wondering: what will make me more of a #stravawanker, auto-uploading the 1km run where I cried and didn’t have the heart to carry on, or deleting it and presenting a curated perspective of my running? I’m finding it hard to run well when I’m devoting precious energy to a cycle of self-obsessed worrying.

All of social media gets a bit narcissistic though, doesn’t it? Blogs and tweets eventually morph from ways to engage and share content, to becoming attention-seeking extremes. Perhaps because all runners have a slightly competitive nature whether against each other or themselves. Runs suddenly become brilliant or terrible; there are some who seemingly never experience an average run. “I went for a run today and it was absolutely fine” doesn’t make a story, and if you’re shouting into a void of millions, it’s stories that get picked up. That tiny niggle following a couple of miles becomes DOMS or requires ice and KT tape. The next run is a comeback and is carefully documented as such on Strava, and Twitter, Facebook and Instagram. Run, report, repeat.

It’s easy to get addicted to the attention that comes to those stories and so it self-perpetuates which is why we all know people who now can’t get home from a run without uploading 4 posed-but-natural selfies over every channel available. If you don’t share what is essentially the exact same photo of your face, in your living room, every time you run, how will anybody know that you’re a dedicated runner? Even though the photo doesn’t involve the people you ran with, the place you were running or indeed anything else that documents that time/day/run in any way whatsoever. If your run is spent wondering how you’ll present it to the masses on Twitter and Instagram, it becomes less about enjoying running and more about enjoying your own narcissism. Which is fine, you do you, but I don’t particularly want to follow you and don’t pretend that you’re talking about running instead of “look at me! look at me!”

It’s all left me feeling uneasy of late and I’ve had to curate who I follow and who I allow to follow me because the way that some people use social media to talk about running brings out the worst in me. Anxiety leaves me overly introspective. I am prone to catastrophise. I worry a lot. I seek validation and praise (honestly, try working with me, I thrive on praise). Seeing that unhealthy behaviour endorsed in others is not a good example to me and is harming my running and my mental health.

This isn’t to disparage the use of social media or the blog community as a whole. I still think it’s ace and 98% of the people I have met through it, aren’t affected by this post.

Acceptable selfie, because it commemorates a time and place and people. It is not me alone in my living room.

I would never have met two of my absolute favourite girls if it weren’t for Twitter and now Fiona and Jodie are the first people I’ll go to about great runs and terrible runs, about boy problems and career moves, and the day won’t come where I see them and don’t take 20 photos. I love reading Carl’s reasonably new blog because it’s so refreshing to read something so measured and to see enduring positivity when faced with injuries. I haven’t seen my friend Owen in person since the year after university, but when I was first contemplating leaving London, it was envying the photos he takes while running on the South Downs and the south coast that really started to sway me. I could go on and on with recommendations of great accounts to follow. I adore every one of you who checks up on me to see how my new life is going, how injuries have healed and how races went. I still want to see every single photo of every medal you all get, all the beautiful views you see on your runs (preferably location tagged!), and your gloriously sweaty faces beaming in delight on trails and by landmarks. I’m just bored of people who use running as a way to indulge their need for attention and who tenuously connect unrelated content in order to tap into the running community.

When I moved house I read Marie Kondo’s The Life-Changing Magic of Tidying which encourages you to discard items that don’t “spark joy” and I’m trying to apply that approach to running and how I talk about it. From here on, I want to post more photos that spark joy in my followers (so expect a lot more views of the Surrey Hills). I want to write content that people enjoy, although I accept that this blog is partially about mental health and isn’t always easy to enjoy. On those days, I hope it’s helping someone. And I want to be honest with what I say, no more catastrophizing, or exaggerating. So to end, this week I went for a run and it was absolutely fine.

(N.B. If you’re seething because you think this post is about you, then it probably is. I make no apology for that; if you decide that a post about narcissism is about you then you’ve proven my point with delicious irony.)